" Look THAT up in your Funk & Wagnalls!" - was a recurring well-delivered punch line by comedian Dick Martin (1922-2008), co-host of TV's Rowan & Martin's Laugh In with partner Dan Rowan (1922-1987), in the landmark video-taped comedy show (1968-1973). Of course, it was a reference to the Funk & Wagnalls Encyclopedia.  Note that versions of The Funk & Wagnalls Encyclopedia were regularly sold in grocery stores beginning in 1953, one volume per week until you got the whole set, just like the classical records. This was affordable for the typical family; with sets like the Britannica, World Book, and Colliers being sold door-to-door, with necessary payment plans. These sets cost $350 to $550.00, compared to $65.00 for the Funk & Wagnalls, which also had a payment plan - buy one book per week! When Microsoft came out with their Encarta CDs, a digital encyclopedia, they initially licensed the content of the latest Funk & Wagnalls, until they created their own content. They later abandoned the Encarta; too much work for the return on investment (ROI). 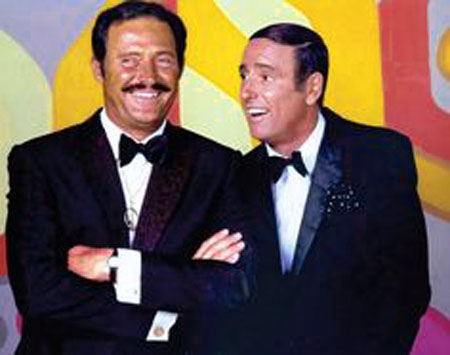 "Look THAT up in your Funk & Wagnalls!"

A later version of the F&W 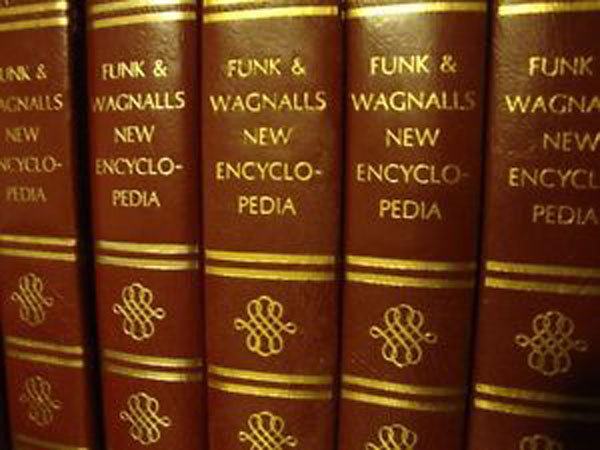 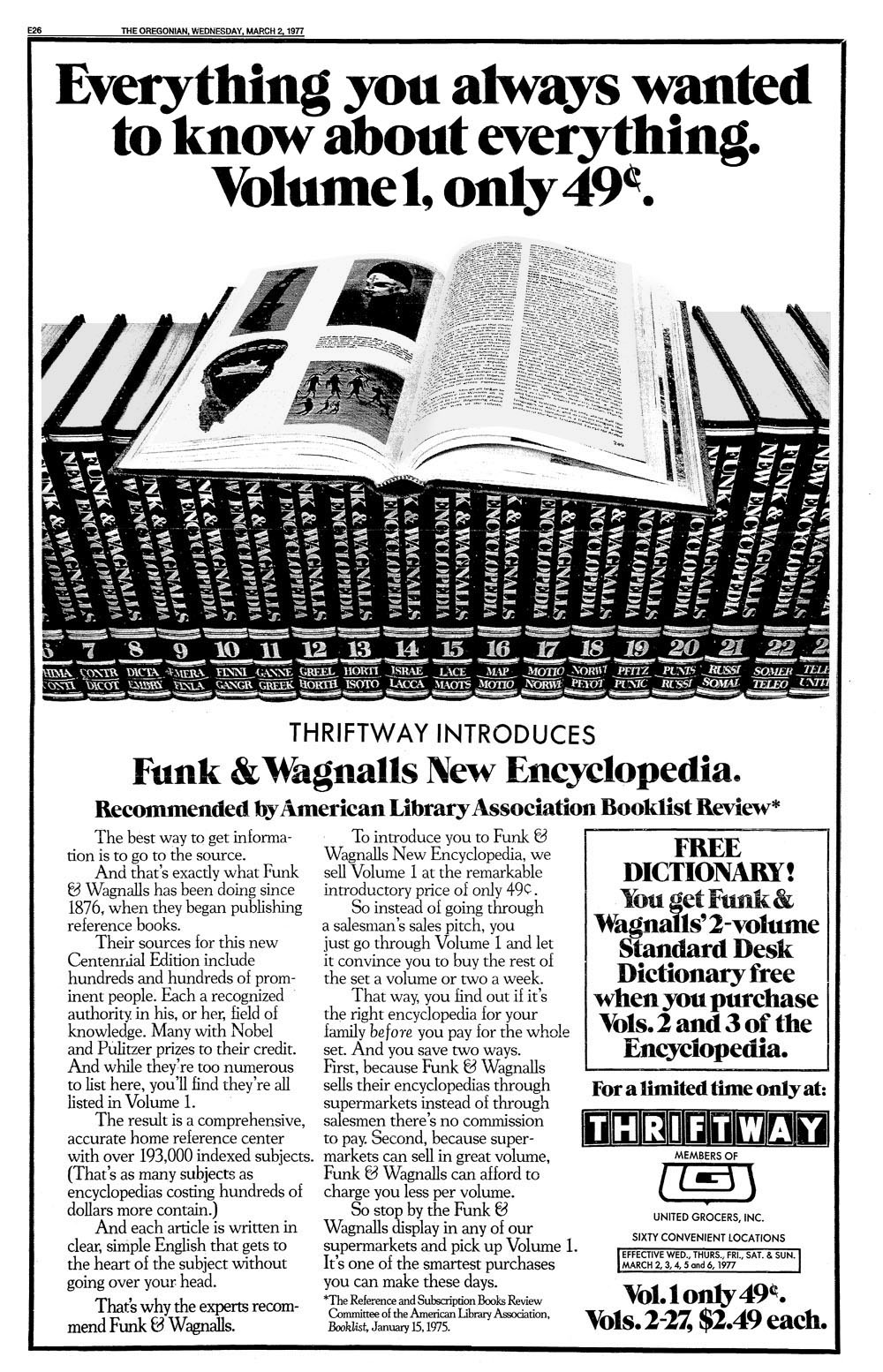 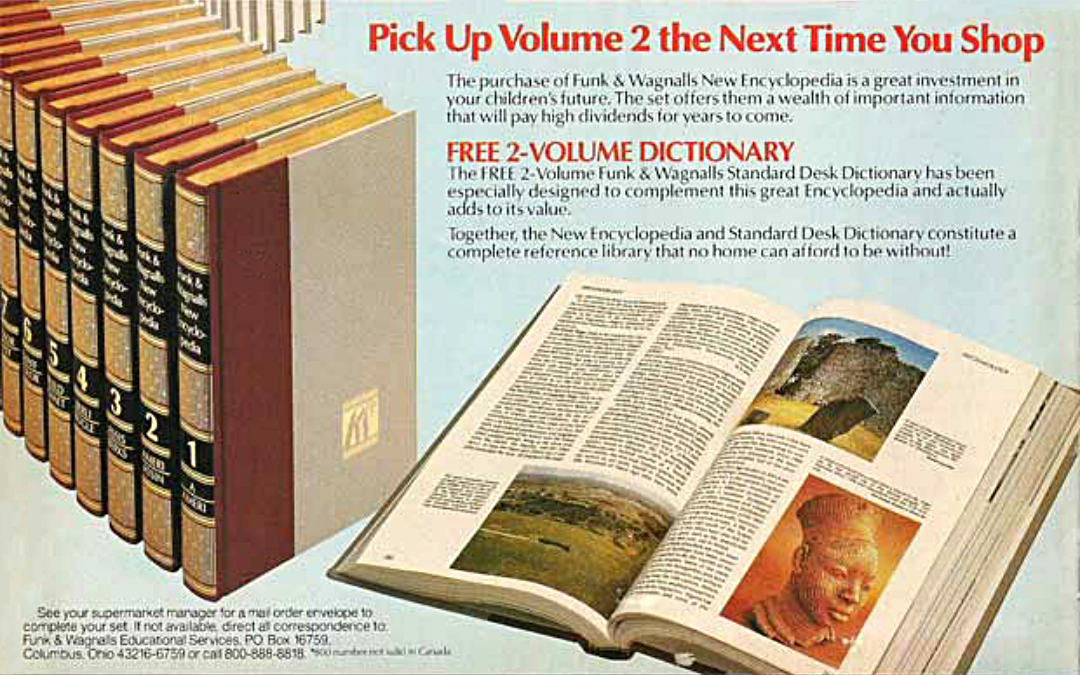 Click on the Button for see the Funk & Wagnalls Encyclopedia sets on eBay, there are many there.

Search eBay for the F&W Encyclopedia

This was an excellent 16-volume children's encyclopedia sold one volume per week in grocery stores beginning in 1960. Bertha Morris Parker was the editor of the Encyclopedia. It was published by Western Publishing and Lithographing Co., the owner/publisher Golden Books (The Golden Press), inexpensive classic novels for children, and printer for Dell comics. Western later purchased Dell, and changed the name to Gold Key comics.  This was republished in 1988 in a new 20 volume set. Likewise, the Golden Picture Atlas of the World was a 6-volume set with each volume devoted to a continent; again, one volume per week. Both sets were profusely illustrated with color pictures, maps, and charts.

Below, you can see my restored and re-bound set of the Encyclopedia with two volumes in one. It was bound by the late Jytte Beatty. You read an odd volume, then flip it over to read the next even volume; therefore there are only 8 volumes in my set. This kept binding costs down. The cover art has been restored in Adobe Photoshop. The montage covers were painted illustrating topics in each volume. They were beautifully rendered; and tantalize the imaginations of the children to read the contents. When I was a kid, I would grab a volume and read a few pages at a time. It was educational and fun.

The colors of the spines tended to fade from exposure to sunlight. The glossy cover was due to a cellophane covering that adhered to the artwork of the covers; but over time, maybe even a year, especially if read frequently, the cellophane separated and tore down the length of the spines. This was very poor and cheap book design, and a lot of Western Publishing Books did this. I remember a drawing book of Woody Woodpecker characters, and Alfred Hitchcock's Haunted Houseful stories collection having the same cellophane problems. They are easy to find, and inexpensive on eBay, but be sure to get a set with no marks inside. 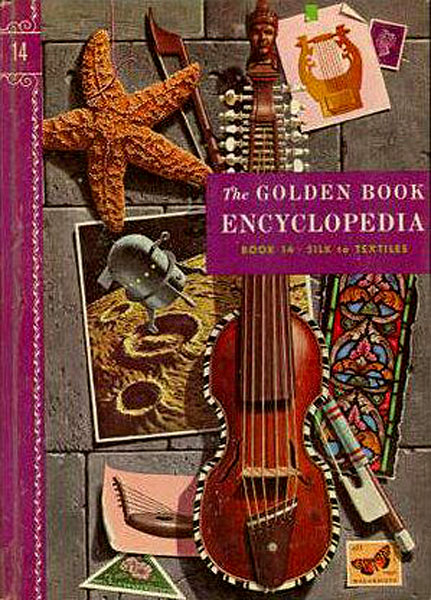 An Advertisement from a 1960 Oneonta Star New York State Newspaper 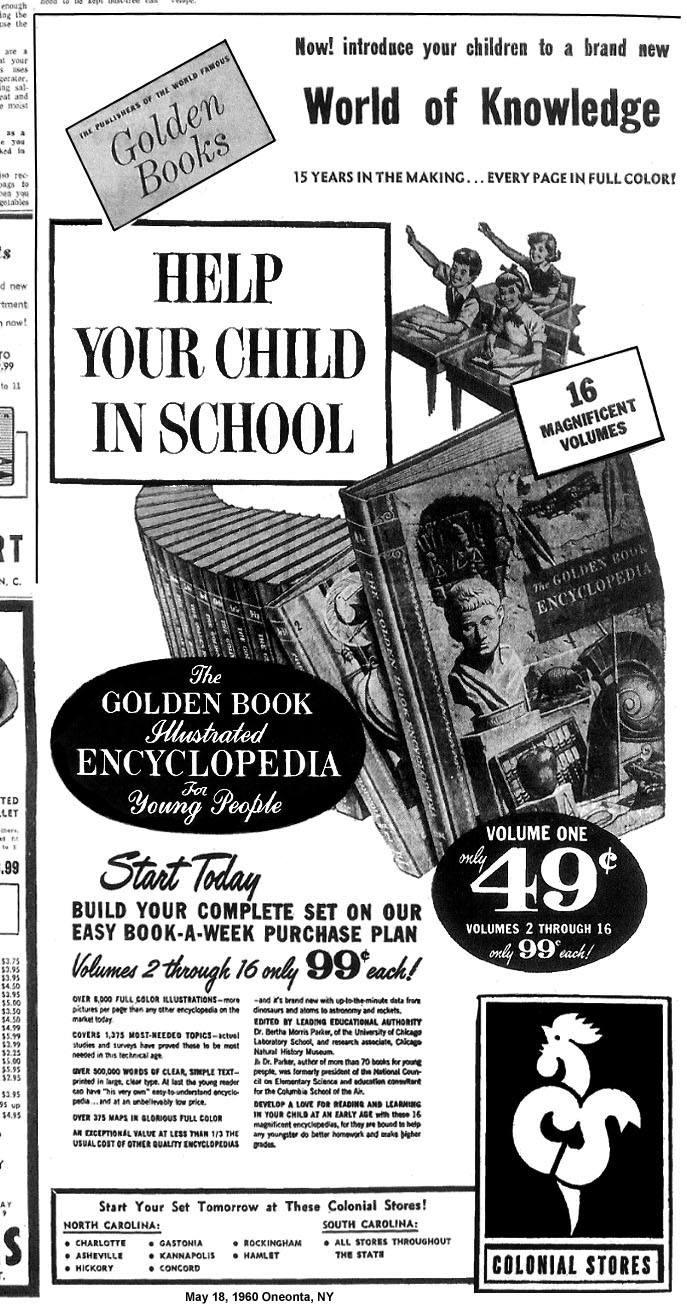 The ad at the right shows that at some point, the Golden Book Encyclopedia was made available for sale in retail stores. This ad corresponds with Christmas sales. Note that this version is clothbound and doesn't have the poor quality cellophane covering over paper. 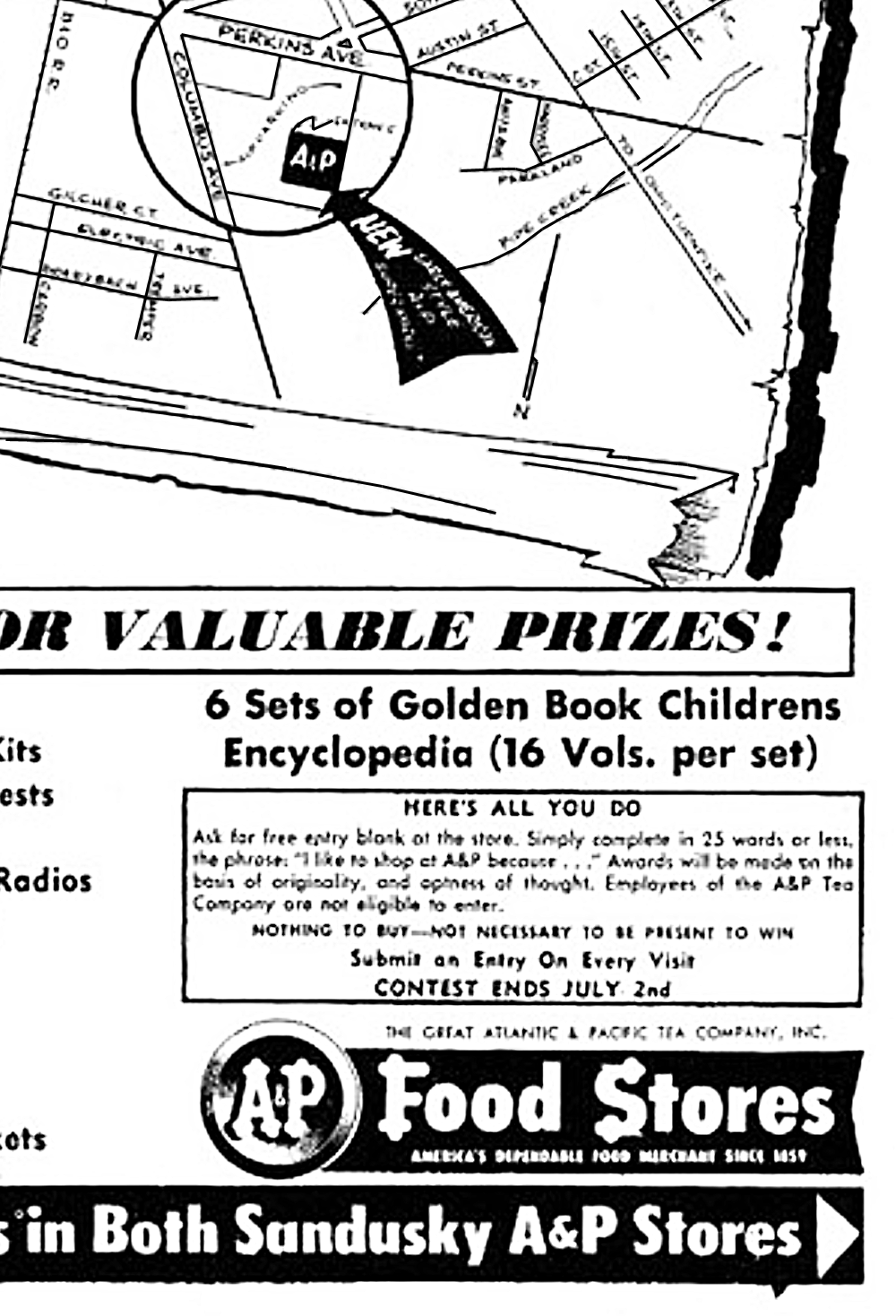 Click on the Button to see the sets of the Golden Book Encyclopedia on eBay.

The first Volume of the Encyclopedia contained a brochure/flyer promoting the rest of the series. Note that there was a mild threat that not buying the entire set could adversely affect your Child's IQ! Click on a Thumbnail to see the Brochure in detail. 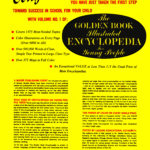 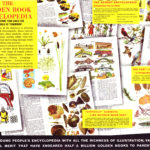 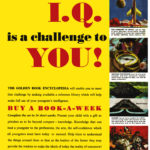 The Golden Book Picture Atlas of the World

Below are photos of my restored Picture Atlas, again bound by the late Jytte Beatty. After all of these years since 1960, this information is still quite valid. Of course there is higher technology and higher populations today, not to mention higher oceans. But the general climates, the lay of the land, the crops grown and minerals and ores mined, and the people are pretty much the same. I haven't found any large newspaper ads for this set.

The ad at the right shows that at some point, the Golden Book Picture Atlas of the World was made available for sale in retail stores. This ad corresponds with Christmas sales. Note that this version is clothbound like those sold to Libraries, and doesn't have the poor cellophane covering. It also combines pairs of volumes, for a total of 3 vols. along with a nice slipcase. 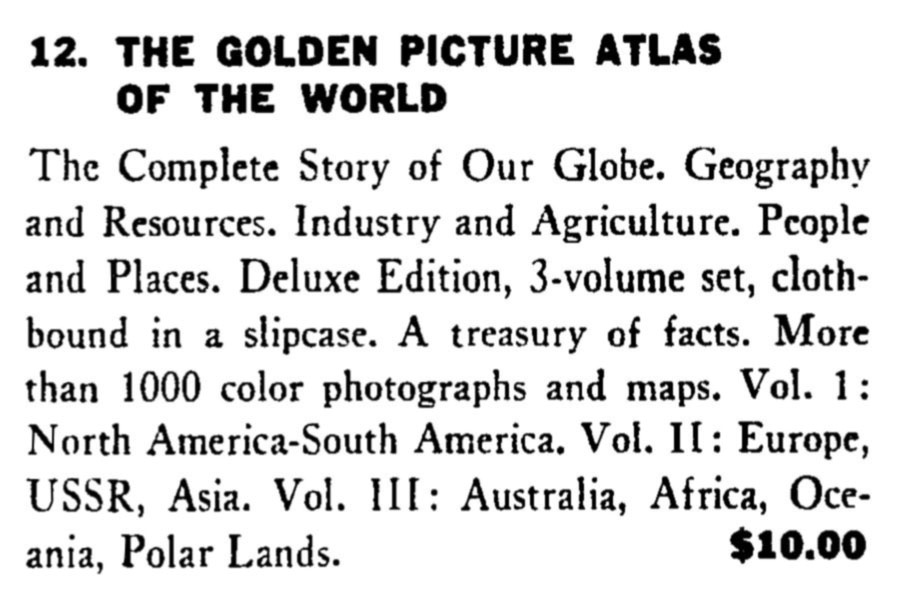 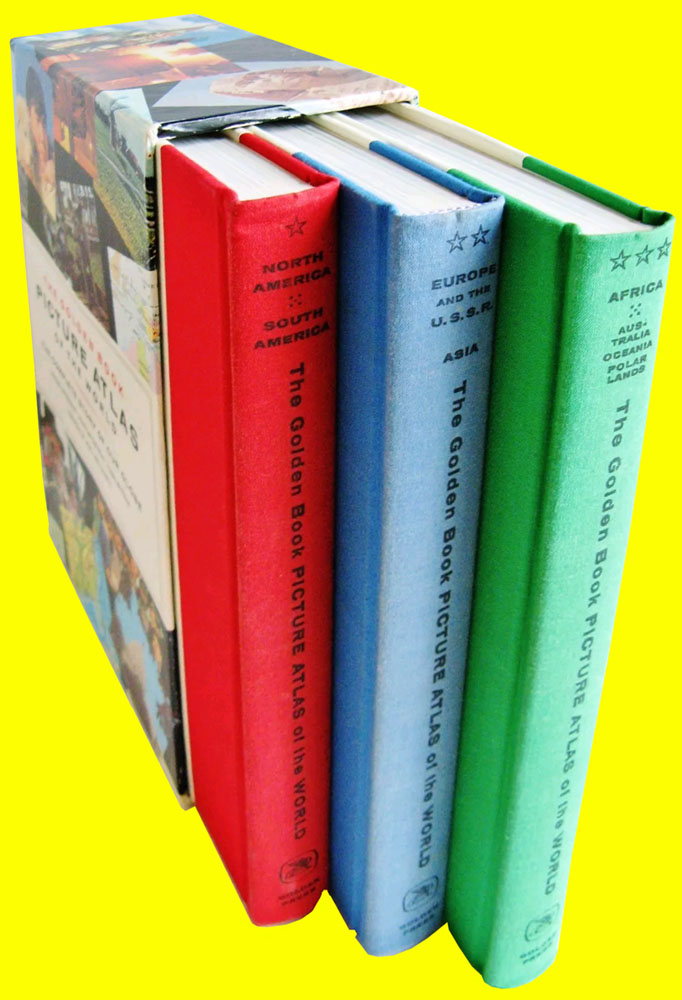 The first volume of the Picture Atlas had a two-page brochure to encourage mothers to pick up the rest of the volumes. Click on a Thumbnail to see the brochure in detail. 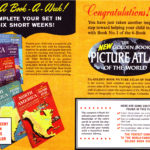 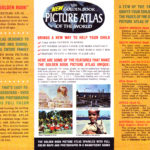 This was a 6 volume color illustrated set continuing in the tradition of reference books for elementary and middle school children. Also, one volume per week in the grocery stores, and clothbound to libraries and retail book stores.

This Brochure for the Golden Book Dictionary was placed in the final 6th volume of the Picture Atlas. Click on a Thumbnail to see the brochure in detail. 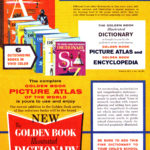 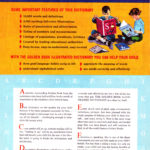 A Safeway ad from 1961, featuring the Golden Book Dictionary and the Picture Atlas 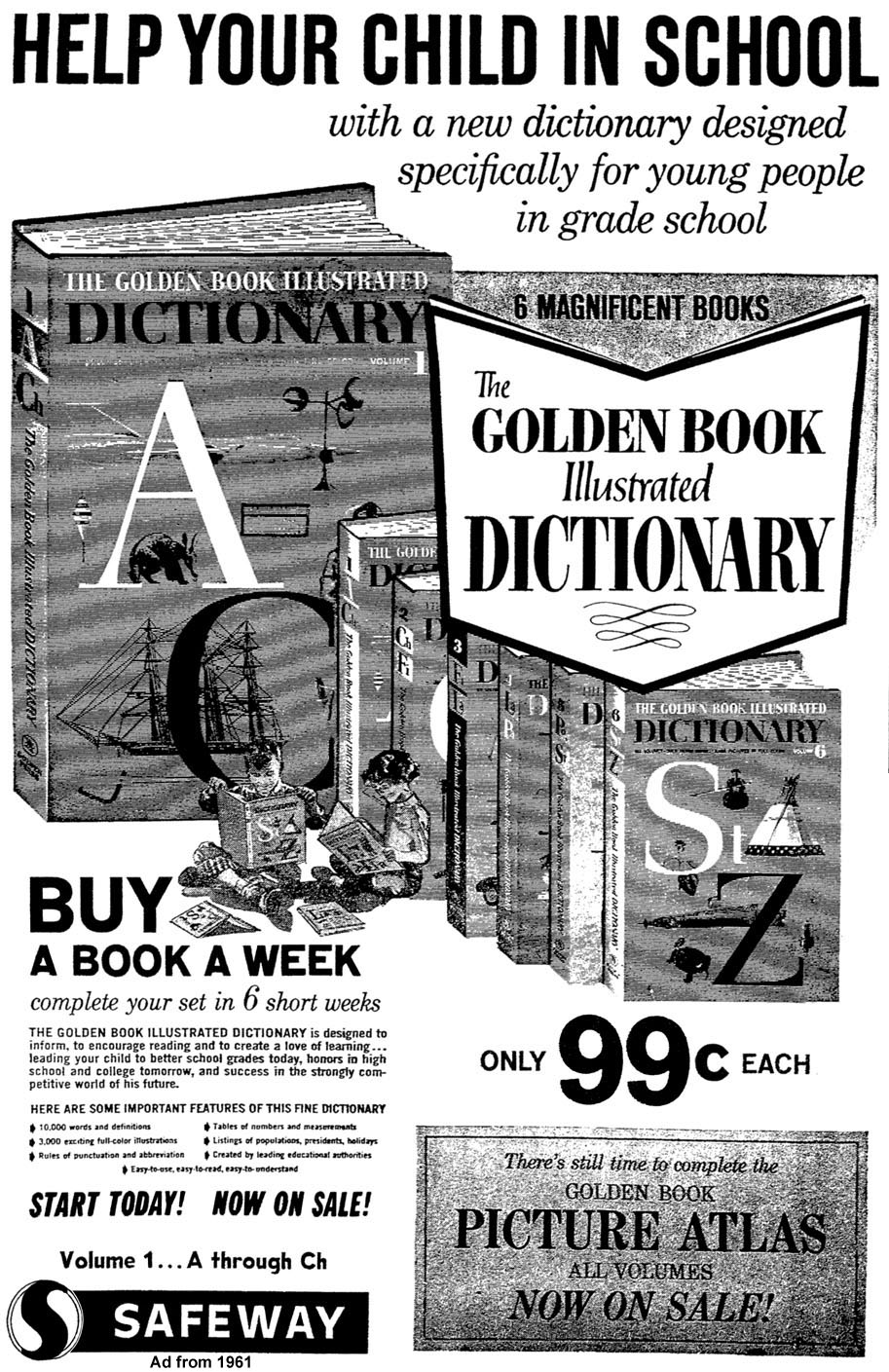 The Artwork for the Covers of the Golden Book Sets

I will soon be posting the downloadable restored artwork for the Encyclopedia and Picture Atlas sets for those who want to restore their own books, or to use as posters. The stickers on my re-bound sets are printed on Epson photo paper, covered with VistaFoil [See Web pg. Book Restoration], and then run through a Xyron 9" Sticker/Laminate/Magnet Machine; using the Permanent Sticker Adhesive Cartridge. 1) Print, 2) apply VistaFoil, 3) cut out with Xacto or Matt Knife using a Metal Ruler, 4) run through the Sticker Machine, 5) peel off backing and carefully apply to book.

This was another popular item sold in grocery stores, one section a week, with content from the J. J. Little & Ives Company of New York City. This thing was huge with more than 2,500 pages; and it had many black and white illustrations with some full pages in color. Of course, it had nothing to do with Noah Webster. After a series of court cases, in 1908 it was ruled that the name "Webster", as applied to dictionaries, had entered into the public domain at the same time as "unabridged" in 1889. Since then anyone has been able to apply the name "Webster" to their dictionary.

There were two credited editors on the title page of the book, the first is Henry Cecil Wyld, a true scolarly lexicographer who died in 1945. Wyld was born in England, and studied at universities in Bonn, Heidelberg, and Oxford. The second editor was Eric H. Partridge, born in New Zealand and educated at Oxford, equally qualified as Wyld. He held lecturing positions at the Universities of Manchester and London. He lived until 1979, so he would have been the active editor.

My Mother bought the original Little & Ives in 1957. (Little did she know that she was providing the historical precedent for Me getting the Standard Treasury, the Golden Book Encyclopedia, and the Picture Atlas of the World, hee, hee!) It was sold in the grocery chains from 1957 until at least 1962; and each printing during that time had a different binding. The 1957 edition had 16 sections, but it later grew to 22 sections. There are plenty of these on eBay. In 1957 the total price of the Little & Ives was $14.54, with payments spread out over 16 weeks.

In the grocery store ad that follows, it is obviously compared to the Miriam-Webster 2nd Edition, a very expensive book at the time which came out in 1937. Miriam-Webster's famous 3rd Edition came out in 1961, well after the 1957 first edition of the Little & Ives Dictionary. 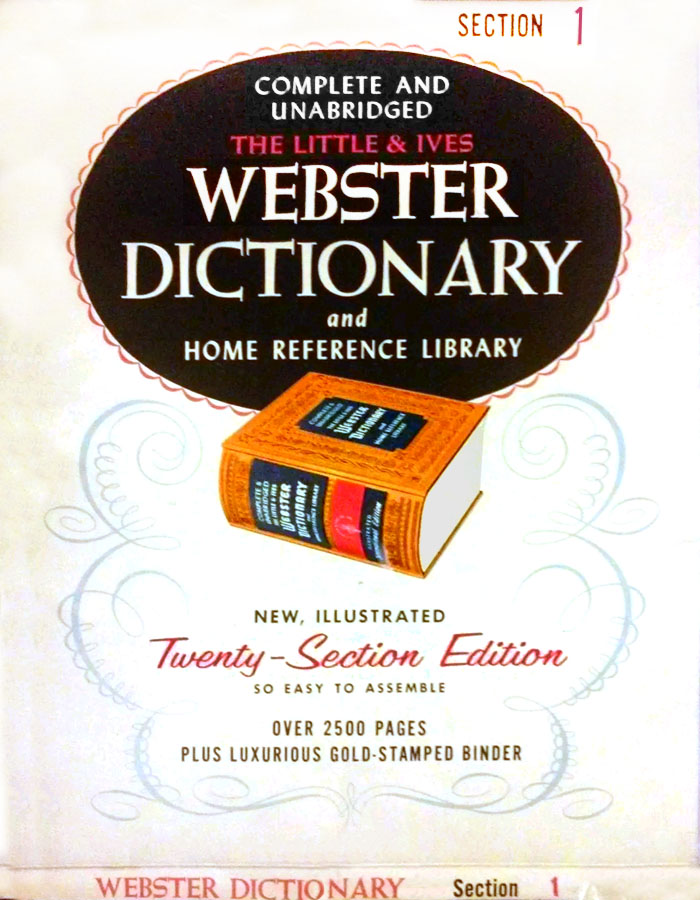 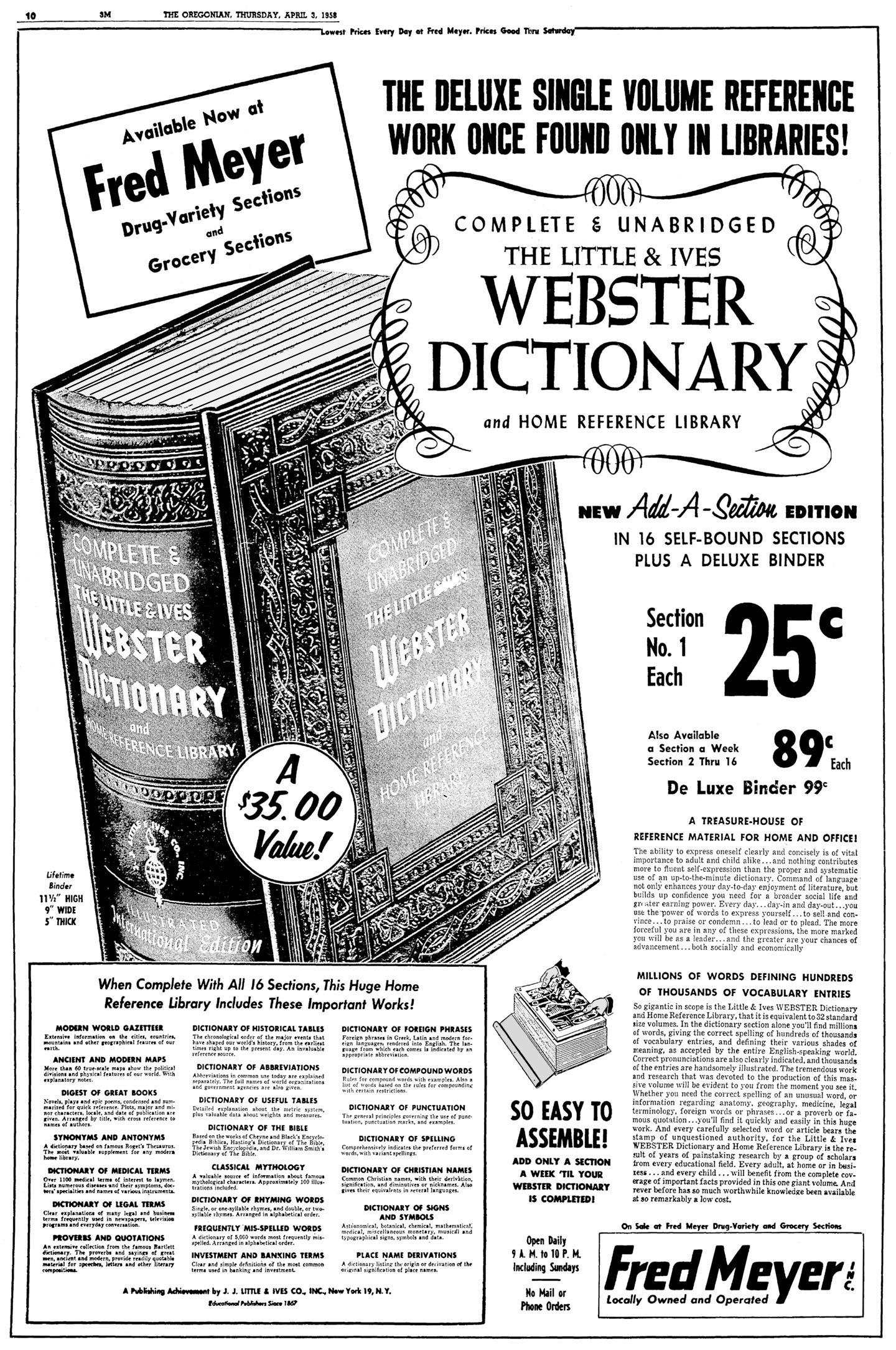 Click on the Button to see the many books of the Little & Ives Dictionary and Reference Library. You will occasionally see full and/or unopened sections in original envelopes as they appeared in the grocery store display.

We cannot count out The Standard Reference Works Publishing Company when it comes to grocery store installment dictionaries. Their entry was the Webster’s New Century Dictionary. Introduced in 1956, I haven't found much information on this. Only a couple on eBay, and only one low-resolution grocery store ad. 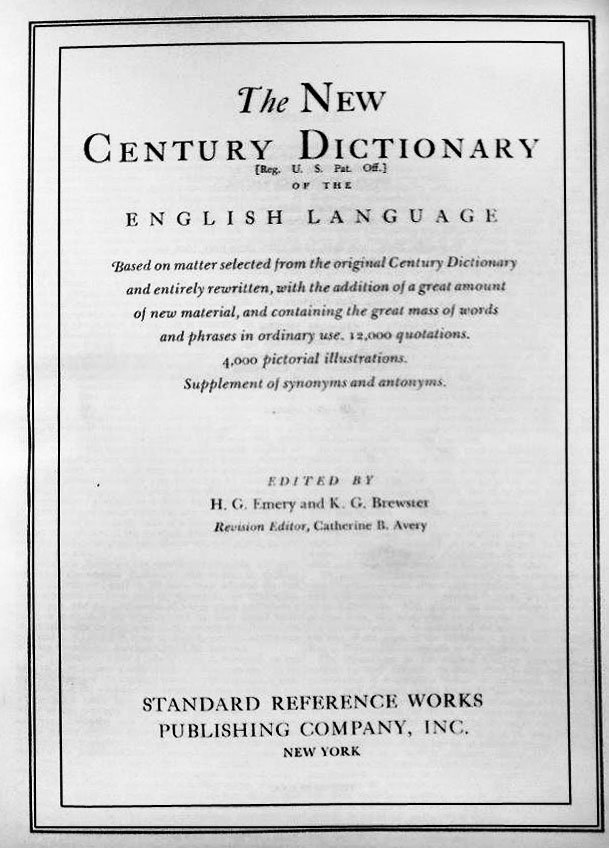 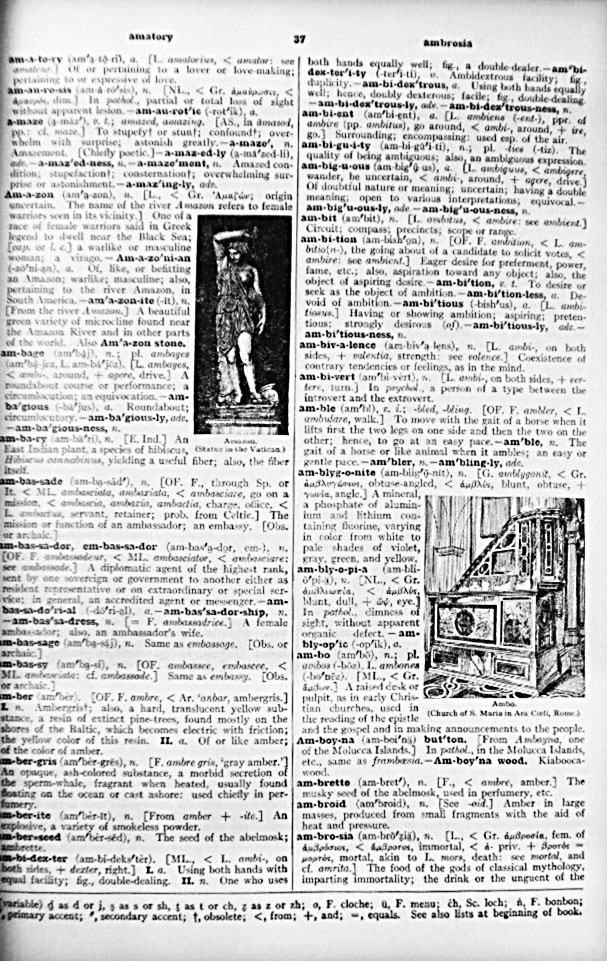 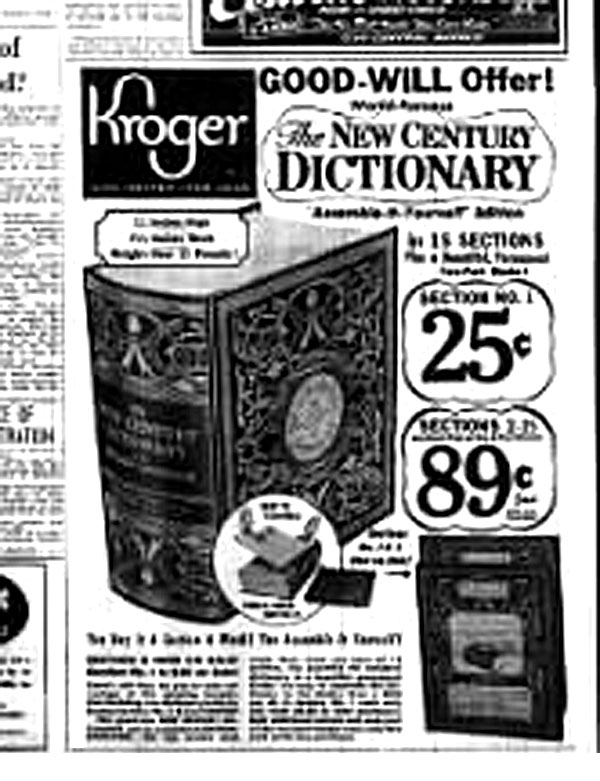 The Standard Treasury of the World's Great Paintings

The World's Great Paintings set (1960) by the Standard Reference Works Publishing Company, is packaged like the Webster Library of the World's Greatest Music - cheap vinyl covered binding (though more durable than paper covered chipboard) that tended to wrinkle with age, making it look tawdry. Of course, the binder can be cleaned with a damp cloth. There are cardboard indexing pages, separating the book into the sections sold each week at the store. The lithographs of the paintings are 11" x 14" and are of good quality. There is a guide section that tells the life of the artists and analysis of the paintings. I have not found any ads for this set; not a lot of information on this. But it has recent good reviews for used sets.