The Webster Library of the World's Greatest Music

The Webster Library looks a lot like The Standard Treasury of the World's Greatest Music, but uses the Remington Records recordings (Soundfountain Site), which used an inferior vinyl compound, and were noisy. Here is the Wiki article on Remington Records. The Webster set binding is cheap looking vinyl like the Great Paintings set that Standard Reference Works Publishing Company produced. The Standard Treasury cardboard and paper binding looked much better. 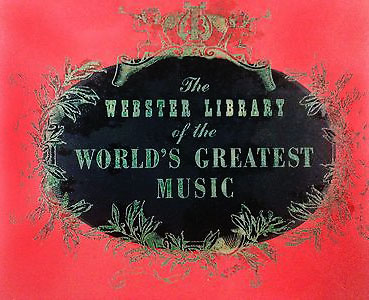 Click on the Button to see if there are sets of The Webster Library of the World's Greatest Music, they come up now and then.

This record set looks a lot like the Basic Library of the World's Greatest Music. Same album style with pocket and similar graphics, 24 records, similar Listener's Guide artwork and text, and "unknown" Artists. There is no mention of stereo. The concert works in the set, are significantly different, in that they are less "old chestnuts", and more "eclectic" than those in the Basic Library. The photos are courtesy of eBay seller "thevalueprovider".

PFL were produced by the American Recording Society. Earlier they did a mono mail order deal called Music Treasures of the World which relied on original recordings and some licensed from East European sources packaged in heavy plastic bags (no actual cardboard cover). These were then re-purposed for the Philharmonic Family Library (PFL). (The ARS was mainly known for recording a lot of contemporary American works in Europe with conductors like Walter Hendl, Hans Swarowsky, etc.) The PFL records were repackaged again into single LPs (sometimes now with performer IDs) on the Avon label. When stereo came on the scene a few PFL were reissued on the main ARS label in true stereo, but for the most part the PFL were mono recordings. 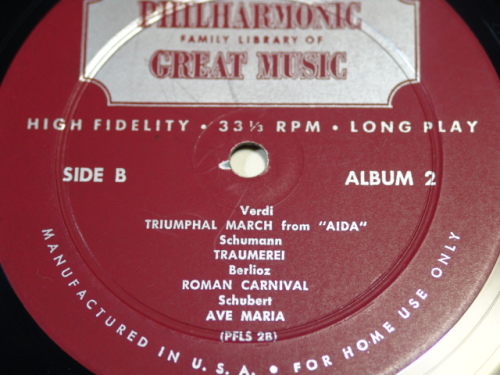 Click the Button to see volumes of The Philharmonic Library of the World's Greatest Music.

The Funk and Wagnalls Family Library of the World's Great Music

The pictures below are of the F&W Family Library. There were 22 albums in the set, with a matching binder of Listener Guides. I suspect they licensed the F&W name because it was a recognizable brand. The artists are listed on this set, but the works are not the same as the Basic Library. They are from RCA's low-cost Camden label of older recordings, still fine performances and in stereo. RCA pressings can be variably good or bad.

The Time-Life Great Composers series were RCA pressings (good, not great); and the Wagner Ring cycle had very bad pressings by RCA using London (British Decca) master tapes. I bought the original Ring Cycle when it was introduced by Time-Life (early 70's); and these were poor RCA pressings. The records were warped and very noisy. I recently purchased a later T-L set of "Das Rheingold" on eBay, it was a European pressing, and was good. Time-Life may have switched away from RCA due to complaints. Photos courtesy of eBay sellers "wehaveabargainwesell" and "electric-city-repair". 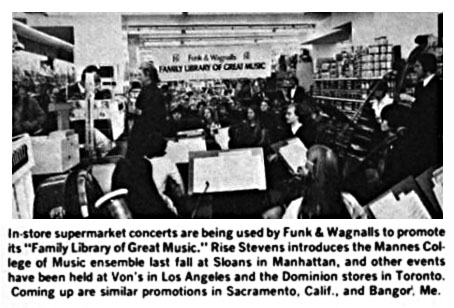 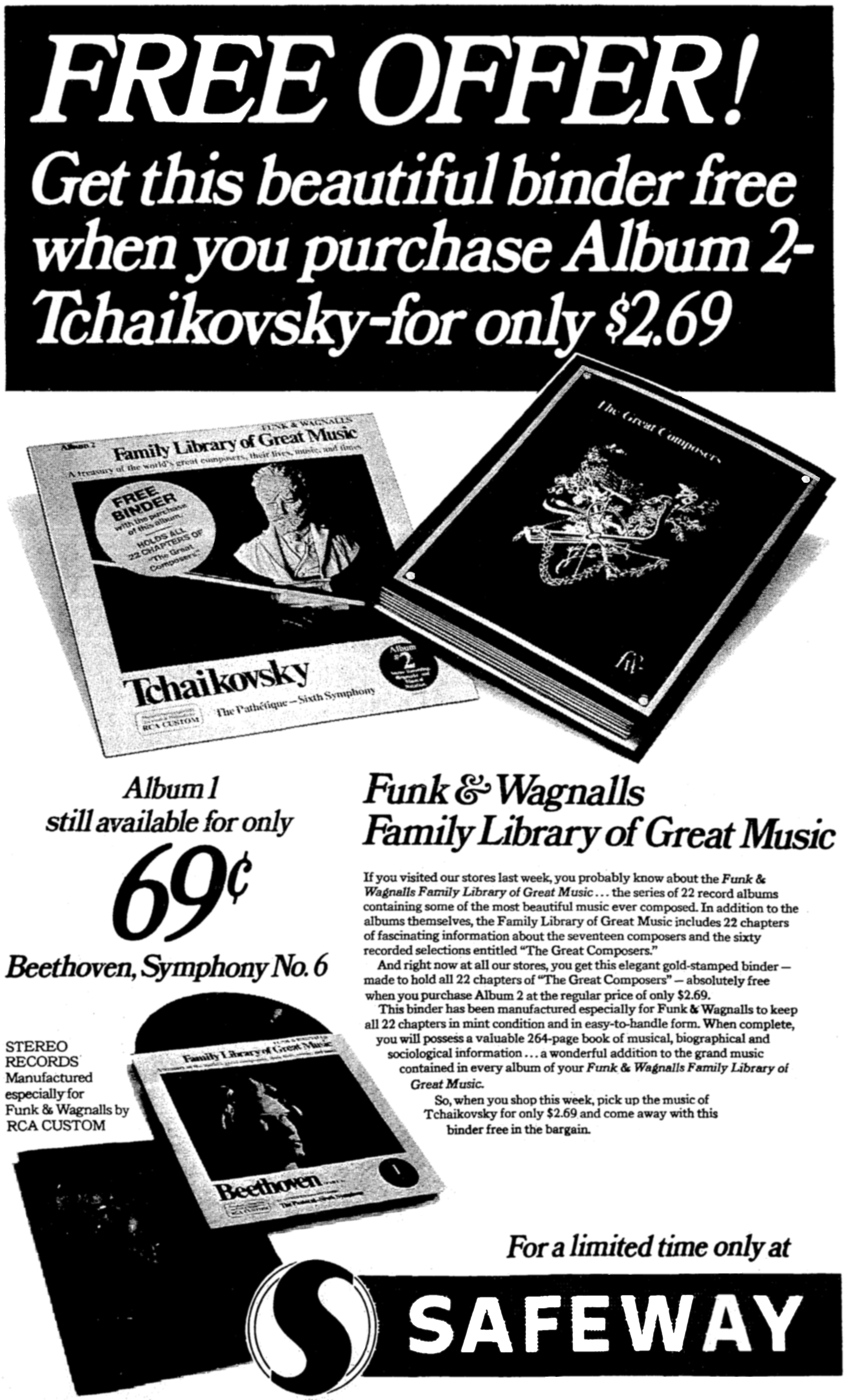 Here is a bold marketing of the entire set of Family Library records, with album and composers guide. This was just before Christmas, when people were expecting to pay more for gift items. $60.00 was still a lot of money in 1977. A loaf of bread was 32¢ and a gallon of gas was 65¢. We actually found the "cents" symbol useful back then! Yes, that's what it is; a "c" with a vertical line through it. 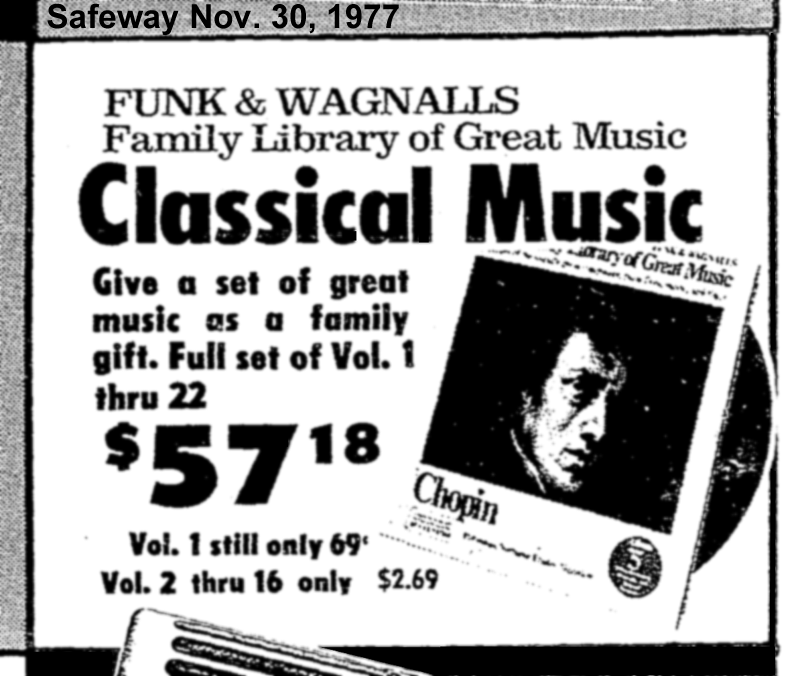 Click the Button to see The Funk & Wagnalls Family Library of the World's Great Music.

The Mail Order Record Sets of the 1970's

Time Life added music in 1967, selling box sets and collections through Time–Life Records; and had a number of record sets related specifically to Classical Music. They had a relationship with RCA Corporation which was a record publishing company and a record manufacturing company with plants in Camden, Canonsburg, Hollywood, and Indianapolis. They used stereo RCA master tapes, except for the Wagner Ring Opera Cycle, which used London Records tapes. London Records was the American name for British Decca Records. There was a US record company named Decca, founded in the late 1930's, founded with investment from the British company; however, they split later, and British Decca used the London label to avoid confusion.

This was an excellent series with an album of 4 records for each of 30 famous classical Composers (120 discs!). It was sold from 1975 to 1979, and was available in vinyl or Dolby cassette format. A very thorough 24 page illustrated Guide to the biography of each composer and his works was included in both versions. The conductors and orchestras are identified. This Guide was much more comprehensive than the Listener Guides in the Standard Treasury or Basic Library. There was also 32 page Index to the Recordings which locates recordings by Composer, Work Title, Orchestra, Conductor, and Artists. This is a class set from the stereo RCA Record's recordings with major orchestras and conductors like Zubin Mehta, Fritz Reiner, and Charles Munch, as a sample.

The only disadvantage is that RCA made the pressings, which had variable quality. The records were often warped, using the RCA Dynaflex 90 gram format (normal is 120-150 grams). It was so thin, it was a "floppy disc"; and was used from 1969 until it was abandoned around 1979. This format also had higher "rumble", a low frequency noise usually generated only by the turntable motor and bearings; but can be generated by a wavy warped record. The Dynaflex record was almost 100% pure vinyl; but it was probably processed too quickly in the presses. Don't confuse Dynaflex with Dynagroove, which was a controversial RCA disc mastering process. I worked for RCA in Indianapolis from 1971 until 1976; although not at RCA Records, but in the Consumer Products R&D department.

Two RCA vinyl developments that WERE good - 1) in 1954 they invented Gruve-Gard (no, I didn't misspell it), it was the raised center and outer rim that reduced record scratching when stacked, all LP manufacturers adopted this, and 2) in 1959 they developed Miracle Surface a vinyl compound containing "317X", for anti-static protection, license-free to all manufacturers (this really worked, those records will not hold a High Voltage charge that attracts dust!). Today's records don't use this, which is why you need an Anti-Static Gun. See our Home Menu page Improving Sound for ways to make these records sound better.

Time-Life had a huge mailing list from all of the products they sold through the mails, that list was a gold mine. They would send out ultra thin floppy demo records with a number of short exerpts from the series. These paper-thin vinyl records didn't play all that well; but it must have worked well enough for them. Audio magazines like Hi-fi Stereo Review also put these type demo records bound into their magazines.

Information on the Musical Works in the Guide

This was a set of twenty 5-record albums called The Mozart Collection. It came with a beautiful hardbound thick book, profusely illustrated, on the life of Mozart.