For a Good Introduction to Classical Music:

Either the Standard Treasury or the Basic Library provide a good introduction to Classical Music. The selection of music is designed to be easy to enjoy, and the documentation provides background to help you to appreciate the music.

Both the "Basic Library of the World's Greatest Music" and the "Standard Treasury of the World's Great Music" were copyrighted in 1958 by the Standard Reference Works Publishing Company (TSRWPC), which also had marketed the infamous Funk & Wagnalls multi-volume encyclopedia also sold in many grocery stores, one volume per week. We have more information on this on the web page Other Record Sets. On the web page History and Marketing of the Record Sets we have an article stating that the Basic Library was made for Kroger and Safeway chains to sell. Apparently, in 1958, Kroger was in the East and Mid-West, and Safeway was in the West, so they didn't compete with each other. The Standard Treasury was made for the nationwide A&P chain.

Back to the Basic Library. This record set consisted of 24 individually packaged recordings with an integral 8-page illustrated booklet that included biographies of the composers, as well as background on the individual works.

The Listener Guides for Both Record Sets

The Listener Guides were written under the supervision of Joseph Laffan Morse Sc.H., LL.B., LL.D, editor of the New Funk & Wagnalls Encyclopedia. The contributors and editors were:

The above list is extremely impressive, did they all really contribute? Or did some just sign off, or mark up the drafts? We may never know. But we do know that both E. Alan Silver and George T. Simon were not experts in Classical Music, and they had worked for the company who published The Concert Hall Society (CHS). They had access to the master tapes provided by the Josefowitz brothers. This is how the CHS tapes came to be used for the Basic Library and the Standard Treasury records.

The early records of the Basic Library had a fragile, but unique, textured translucent rice paper sleeve. Later records were sold without a sleeve, and only used the built-in pocket of the album to protect the record. 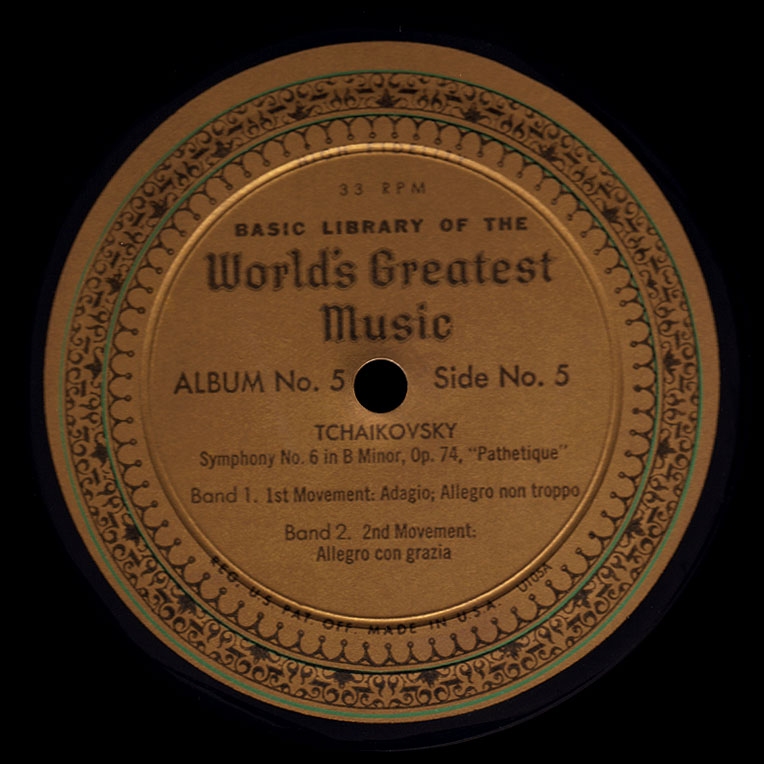 The Orchestras - The Conductors - Soloists

The History and Marketing of the Record Sets

Click on the Button to the Right or Below to see the sets of The Basic Library of the World's Greatest Music. There are many available.

Search eBay for the Basic Library

The "Basic Library of the World's Greatest Music" on Philips Cassettes!

These were manufactured in 1985 by M/L International Marketing, Inc. in Tampa, Florida. I had never seen this set before until a one showed up on eBay. The photos are courtesy of eBay seller "kindvintage". There are 24 cassettes, one per record, in Mono and with Dolby B processing.

I interviewed one of the principals of the company, Mary Moseley, who is in her 80's now. She told me that her partner Lee Lambert (M/L, get it?) was very interested in Classical Music, and picked up a mint condition Basic Library of the World's Greatest Music in Tampa, Florida, where they both lived. They wanted to re-issue them in cassette form for children's education. Lee was able to copyright the recordings in his name, as well as the extensive information in the Listeners Guides. He supplemented this information with games and exercises for children to help them learn about the Composers and music. He then located a company that carefully cleaned the records, and transferred the music to tape. The cassettes were mono, unless they had electronic stereo enhancement, and were not labeled as mono or stereo. The Listeners Guides were made into nicely bound books that were included. This was a very expensive process, and may have been just a labor of love for Lee and Mary. Their goal was to use these sets to help children learn to appreciate Classical Music. Mary emphasized to me how much work this was for both of them; it took many months.

These sets were popular with libraries, and with families using home schooling. This apparently was not a big money-maker for them, and Lee later converted the music to CDs, as he continued to sell the music. This is how the Josefowitz recordings continued on 25 years after the Concert Hall Society. Lee may still have a number of unsold sets. They were not sold nationwide, but regionally in the Southeast. 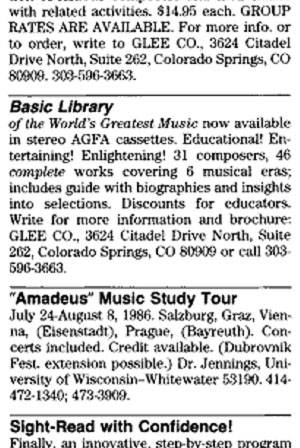 Another Distributor of these Cassettes

This is an ad that appeared, in approximately 1985 from a company in Colorado, regarding offering the cassette version to musicians and educators. It says that the set uses Stereo AGFA cassettes; but we know that the recordings were mono, so this is misleading. The cassettes are capable of stereo recording, but when both tracks are identical, it is mono. Because Lee Lambert was only selling regionally, this was a way to get broader exposure. Probably this distributor assumed the recordings were stereo, and said so.I still have not found out the price of the set in 1985.

Ah, It's a tangled story about how these recordings were used by so many companies. Be sure to click the above "History and Marketing..." Button for more strange information.